My life so far has felt like a series of missed connections. It’s never the guy I want to call who calls, not coming up with a good comeback until hours later, or not having the guts to speak up for myself when it could have made a difference has pretty much been the theme of my entire life. I was always pretty shy. I had to force myself to emerge from my impenetrable shell by overcompensating with forced and feigned confidence. I always wanted that to be my genuine self. Strong, carefree, and with zero fucks to give. But it never really was. Although I portrayed an outgoing and sanguine exterior, I was actually usually filled with nearly petrifying social anxiety and insecurities that always made it difficult for me to fully be myself. I was so good at putting on a façade that it became second nature to me; however, when I think about it, there are very few people who really know the real me. In fact, it wasn’t until I started this journey that I even began getting glimpses of understanding who I really am.

If you had asked me 6 weeks ago who I thought I was, I would have looked at you wide eyed, tripping over my words with drool collecting in my lower lip. I honestly had no idea. I knew what was: lazy, apathetic, unmotivated, and with a very strong desire to change. But who I was was a very different story. It was an autobiography I wasn’t ready to write because I knew I was not yet who I wanted to be (I’m still not, but I’m certainly closer). Since I started this journey, I have begun to realize that getting to know yourself takes a  lot more work than what normal life allows. It requires taking yourself way out of your comfort zone and completely surrendering to the flow of the universe. To quote Sheryl Strayed, you need to “put [yourself] in the way of beauty.” Doing so also requires that you resign yourself from the need to have control. To put it simply, in order to gain control of your life, you first have to relinquish control completely. The only thing that I am in charge of is making the decision everyday to get my ass back on that bike and start pedaling. Everything else is out of my hands.

Spontaneity has always scared me. I never liked the idea of making a “leap of faith.” I always needed to know the possible outcomes, and that strong, unadulterated need to know and control every situation has made me live in fear my entire life. I always had trouble with relationships because I couldn’t trust. I struggled to make any kind of decision because I was terrified of making the wrong one. I never allowed myself to do the things I desperately wanted to do in fear that, somehow, the worst case scenario would happen, and I would end up full of regret. All of these things weighed me down when I decided to embark on this journey to self improvement. Every. Single. One. Unwanted feelings of self doubt, and questions of what might happen to me clenched in my chest. People telling me, “I’m sorry, but no one really thinks you are actually going to be able to do this,” and worries of my own that I may not be successful were constant sources of anxiety for me. I would lay in bed at night, and panic would rush over me with the sudden realization that my normal comforts were about to be stripped from me, and I was going to be doing something I seriously doubted that I could do, and was completely out of my comfort zone. But then I thought to myself, “Fuck it. I’m just gonna do it anyway.”

By deciding to do something, drowning out the voice in my head telling me I should be afraid, I was already successful. I had already accomplished change. The bicycling part has actually turned out to be a very small part of the big picture of my metamorphosis. Sure, I have changed physically, and I have gained the ability to force myself to do things that are good for me, even when they freaking hurt (let’s see if that lasts…), but that’s not the change I am most proud of. I am most proud of the freedom and openness of spirit that I am beginning to develop, and my newfound thirst for saying “yes” to life. (Can you believe I couldn’t find a good Yes Man meme to accompany this post? It just feels like such a missed opportunity).

Last Thursday, my first full day back in Victoria, started out like any other day. I forced my heavy and crusty eyes open, and sat up in bed until I got my bearings. I was exhausted since the previous day was a really long one. I was so tired that I figured maybe it wouldn’t hurt to allow myself a day of laziness and relaxation. Afterall, it was the first day in a week that I had access to WiFi, so what could a few hours of Netflix hurt? First, however, I really needed to force myself to swing my limp and sore legs over the side of the bed, walk down the hall to the kitchen, and cook myself a much needed breakfast. With my metaphorical gas tank running on fumes, I pushed myself out of my daze, collected my foodstuffs, and stumbled into the community kitchen that was shared with the entire hostel. When I got there, there was only one stove available for cooking, and I timidly prepared my food in the shadow of a couple of intimidatingly tall (and, dare I say, attractive) men. For some reason, I felt the need to continually apologize for my presence there, as if I didn’t have just as much of a right to be there as they did. (Unnecessarily apologizing for myself has always been a nasty habit of mine). As I stood rigidly over the sink freeing my breakfast potato of its skin, I felt uncomfortable in my own. Silently, I prepared my breakfast and coffee. When another young woman entered the kitchen, I immediately felt more at ease. She was boiling porridge with apples (her words) when I began making conversation. I offered her some of my coffee and we began telling each other about ourselves. When we were finished cooking, she sat alone at a table in the common room. I stood there in my social awkwardness not knowing which path to take. Should I sit down at another empty table and go about my Netflix filled day, or should I sit down at the table with this kind stranger and see where the day could take me?

I finally overcame my awkwardness, and decided to make the less comfortable, but overall more exciting decision, and sat with her. While eating our very different cuisines, Bibi (from Germany) and I talked nonstop until we decided, why not explore the city together? We walked until my thighs were tight, and my feet were blistered, and decided to relax on some rocks on the beach facing Olympic National Park. It was an amazing view. 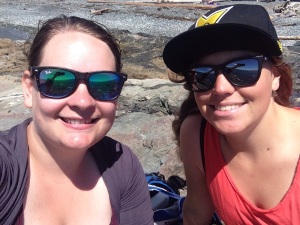 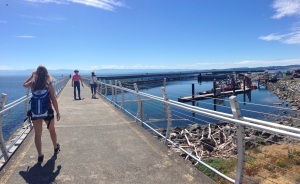 As we sat there, basking (and baking) in the sun, and enjoying the treats we had bought during a spur of the moment trip to the Dollar Tree, we were interruped by another solo traveler requesting to join us. Fiona, also from Germany, made us a group of three random travelers who would never have met in any other circumstance. We ended up having one of the most incredibly fun days I can remember having in my adult life because it was completely unexpected. While I was cooking us dinner at the hostel, a fourth traveler, Abdullah from Saudi Arabia, joined us, and we decided to make a night of it.


It was a day and night that I will not soon forget. By completely opening myself up to the universe, and not letting my fears get in the way of saying “yes” to life, I ended up making a connection with not one, but three people that will probably last my entire life. You never know where the day can take you unless you let it. So if you, like me, find yourself resisting life in fear that things may not turn out the way you want them to, are too scared to release control, or maybe you just don’t have the confidence to believe that you can be successful, trust me when I say, you should do it anyway.

You can make a donation to my PayPal account:

Anything helps and is immensely appreciated!